Now, the eighth grader at Westridge Middle School finds himself among the nation’s fastest middle schoolers. On Nov. 5, Ethan placed 9th with a time of 13:34.7 at the National Middle School Cross Country National Championships in Louisville, Kentucky. Ethan competed in the championship boys 4k race.

“All things I would be nervous or anxious about leave my mind as soon as I start running,” Ethan said. “Running for me is calming. It allows me to take a break from everyday life and just run.”

Running clears Ethan’s mind, but he puts in grueling work to get there. He prepared for the 2022 season by practicing with the Islanders at Grand Island Senior High this summer. Monday through Friday, Ethan, along with the Islander cross country team, showed up at 6 a.m. ready to run.

“Though the summer was physically and mentally demanding, I feel this training helped me the most as I was able to train with the high school athletes that would push me. They helped me improve my speed and endurance more than I could by myself,” Ethan said.

He may have been the new kid on the block by running with the high schoolers, but putting in the work alongside high school athletes fueled Ethan. He improved his time by 30 seconds, leading him to submit his time from the Central City invite to the United States Track and Field Association (USTF). To compete in the Championship race, Ethan had to submit an electronically timed race result that was in the top 30 percent nationally (per the MileSplit.com website), which his Central City time qualified.

Ethan had the opportunity to represent the Westridge Cougars and Grand Island on a national level, and it was an opportunity he didn’t take lightly.

“At the race, knowing that I would be representing my city and state at the national level definitely caused me to become more nervous,” Ethan said. “But those nerves allowed me to push my body much further than I thought I could,” he said.

Ethan prepared for the race at Tom Sawyer State Park in Louisville just like he would any other.

Before each race, Ethan tries to walk the course to gain an understanding of what parts may be more difficult, when to speed up, or when to pass. He then does a shorter run the day of or before the race. After stretching before a race, he makes his way to the starting line with his team, then takes a minute to calm himself before the start.

Ethan said the course in Kentucky couldn’t have been better, with clear weather conditions any runner would love. The scenery was beautiful as he ran a trail abounding with trees and open fields. He pressed on, enjoying the beauty and propelling himself toward the finish line. 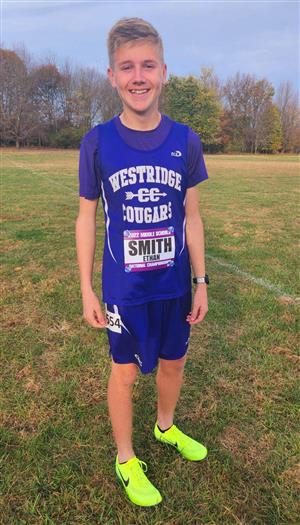 “Crossing the finish line was a combination of excitement and pain,” Ethan said. “The wave of pain and exhaustion that rushed over my body as I slowed to a stop was intense. It was a combination of burning in my lungs and legs. But the satisfaction of knowing that I had given my all and my best was enough for me to enjoy the moments of pain.”

Ethan placed 9th out of 189 athletes in the boys championship 4k race.

“Learning that I placed 9th was one of the best things I have heard, it was the knowledge that months of work, dedication, and pain hadn’t been for nothing,” Ethan said.

“All of this has made me more and more grateful for the people I have had to help me,” Ethan said. “Through all of the training and running that had to be done more often than not, I had someone running right next to me, and I couldn't be more thankful for it.”

Ethan plans to keep running as long as his body allows. His goals are to run or play soccer at the collegiate level, while pursuing his career interests in aerospace engineering.

Ethan said running is one of the hardest sports to get into because it takes months of dedication, but those months of hard work can be gone in weeks.

His advice to younger runners could be applied to many things in life:  “If you can stay determined and passionate about it you can succeed and do great things. Even if you're not the best runner, being able to start and finish a race knowing you gave it your all is the best thing any runner can do,” Ethan said.

Congratulations, Ethan! Way to represent your school and our city!